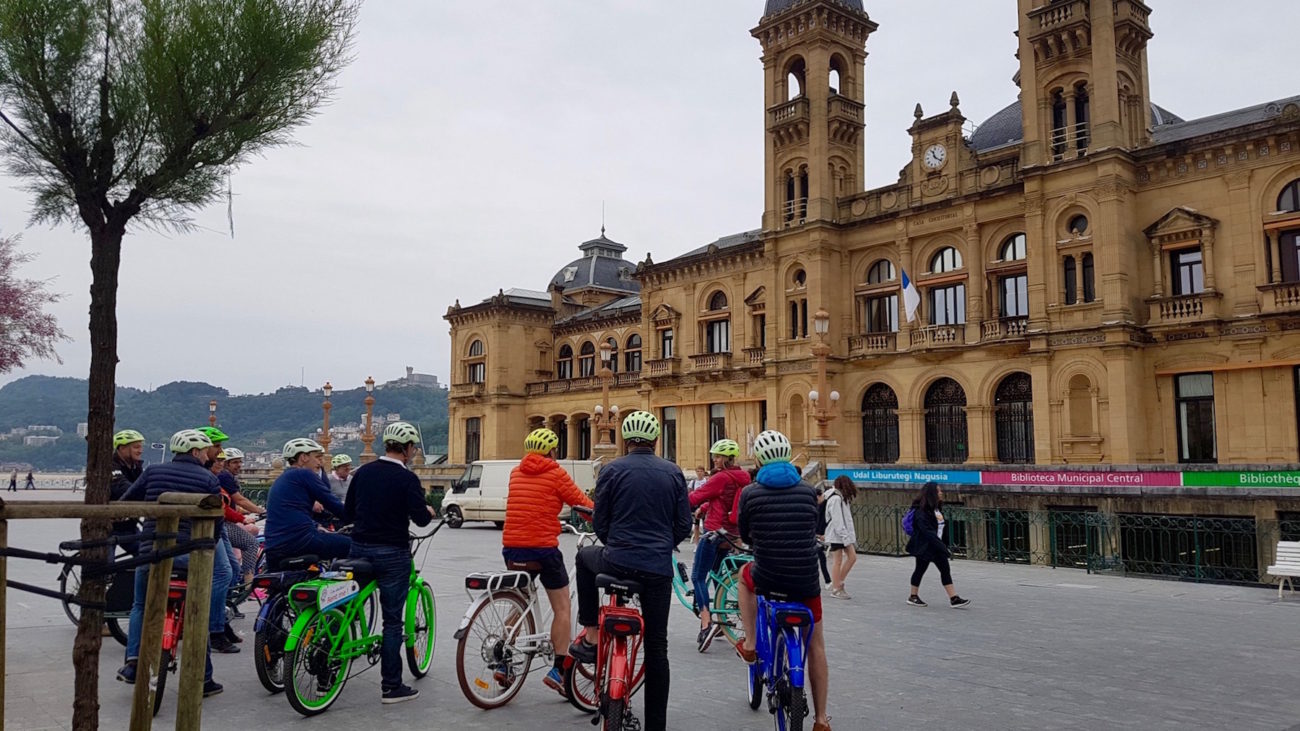 A few days ago, we made a guided tour of San Sebastián during a seminar organized by Passion Côte Basque, a big thank you to them 😉.

For this day, we met you in front of the Barceló Costa Vasca Hotel, in San Sebastián. Once we are all together, we explain how our Pedego electric bikes work. We then set off down the avenue towards the beach of Ondarreta where is the Wind Comb, sculpture made by sculptor Eduardo Chillida and architect Luis Peña Ganchegui. The power of the ocean has transformed its natural character as a work of contemporary art into a place for residents and tourists to meet and relax.

After this cultural break, we start climbing Mount Igueldo, effortlessly thanks to our Pedego electric bikes. The summit offers an exceptional panorama over the city of Donostia. We can admire the bay of La Concha which is the most photographed and the most visited, as well as the Island of Santa Clara where is the fourth beach of San Sebastian. Mount Igueldo is also home to the amusement park, whose attractions and funicular are still as traditional as when it was opened (1912).

We go down again towards the beach of La Concha, considered as one of the most beautiful city beaches in Europe. The view is magical, with Mount Igueldo to the west, Mount Urgull to the east, and Santa Clara Island in the middle of La Concha Bay in the background. Continuing our tour, we make a stop in front of the Marie de San Sebastián, magnificent building (which was until 1924, a Gran Casino of the city) as well as in front of the Hotel Maria Cristina. This 5* hotel, built in the style of the Belle Époque, houses the greatest stars during the San Sebastian International Film Festival which takes place every year in September. We pass the Catedral del Buen Pastor, built with slate and stone from Mount Igueldo, and cross the Maria Cristina bridge before arriving at Zurriola beach.

Zurriola beach can be defined in 3 words: waves, surf and youth! It is a very dynamic and living beach whose promenade is decorated with the sculpture of the Columbra of Peace which symbolizes the commitment of the city with peace, freedom and cohabitation. Behind us stands the Palace of Kursaal, headquarters of the San Sebastian International Film Festival. We continue our itinerary by taking a tour of Mount Urgull by the ocean, along the well-designed cycle path, to the sculpture of the Construcción Vacía before stopping next to the church of Saint Vincent, opposite the San Telmo Museum, the oldest museum in the Basque Country.

Arrives the hour to make a break to the bar La Viña, we order some tapas and a drink, before returning to the hotel to close this day or we traversed a small score of kilometers on the beaches of San Sebastián.

Since a picture is worth a thousand words, we let you look at the photos that summarize this beautiful day, see you soon at Les Roues de Lilou!

This website uses cookies to improve your experience while you navigate through the website. Out of these, the cookies that are categorized as necessary are stored on your browser as they are essential for the working of basic functionalities of the website. We also use third-party cookies that help us analyze and understand how you use this website. These cookies will be stored in your browser only with your consent. You also have the option to opt-out of these cookies. But opting out of some of these cookies may affect your browsing experience.
Necessary Toujours activé
Necessary cookies are absolutely essential for the website to function properly. This category only includes cookies that ensures basic functionalities and security features of the website. These cookies do not store any personal information.
Non-necessary
Any cookies that may not be particularly necessary for the website to function and is used specifically to collect user personal data via analytics, ads, other embedded contents are termed as non-necessary cookies. It is mandatory to procure user consent prior to running these cookies on your website.
Enregistrer & appliquer